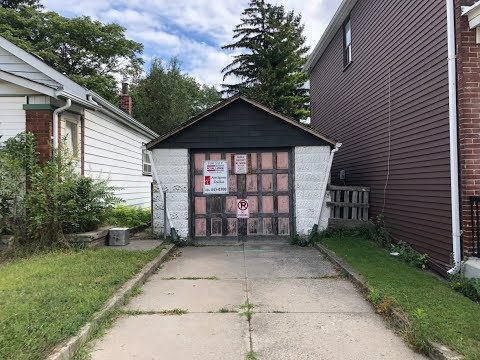 Toronto garage selling for nearly $600K Toronto garage selling for nearly $600KYou’Re about ten minutes walking distance to the subway station on Danforth. So this is the property. It’S a the car garage and it’s going for $ 599,000. No, just the idea of the size. I brought my measuring tape. It’S a hundred feet long and 20 feet wide. Now this price might sound out just for realtors in Toronto. That’S a given the potential of the property! That price is actually a steel and you could look at anywhere from 1500 to over 2,000 square feet of living space. Few doors down in the same neighborhood is another same size property. What is your experience been like so far, there’s actually two adults and two young kids under the age of 5 and for us there’s plenty of space right. We’Re looking at 2100 square feet recently renovated to include a second story. He says now. His home is actually one of the bigger ones in the neighborhood is more than enough footprint. This home is also sitting on the same size of property as the garage it was sold for 2.1 million dollars last summer, but is the potential of the property really worth almost 600 thousand dollars? Most people, I spoke to said: no, no, I’m not surprised. I’M sad. Cuz, it’s shouldn’t be like that makes it accessible for a lot of young people can’t get into homebuyers could buy in, and it’s not that anymore. According to the Toronto real estate board, the supply is not meeting the demand for housing in the GTA and the price gap between condos and attached or semi-detached home is. This is why condemn says: buyers are looking for alternatives for a detached home because it raised a family, they have a backyard out of garage, and it’s both. Why all the amenities you need sold on this idea. If I had $ 600,000 like around no life, the thing the shocks me the most about, it is just how normal that seems to me now, I’m like at all, but if I think about a little more unlike people from most other cities definitely sink, and it Would be trucks by that so far, there are no offers on the garage hallway at the Dallas CBC News. Toronto. A one-car garage is listed for $599,000 in Toronto’s Danforth neighbourhood.