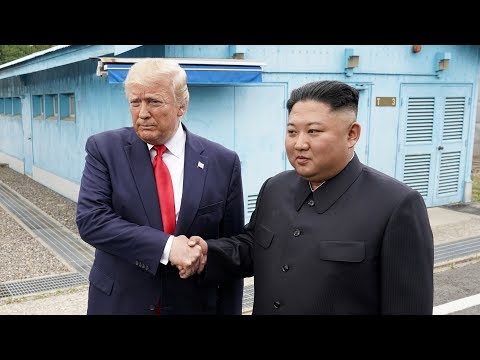 Trump becomes 1st sitting U.S. president to enter North Korea Trump becomes 1st sitting U.S. president to enter North KoreaIt was a meeting that made history. The u.s. presidents has wrapped up his visit with North Korean leader Kim Jong-un boom. It ended on a high note for the Trump Administration, with a Monumental step into North Korean territory going to North Korea and they say – and they say that’s a very historic moment – that I think it is a historic moment that we went over the line and turned Around at every, but he was so happy because this big thing this is the first time a sitting. American president has entered North Korea. President Trump called the moment, an important statement and a great honor. The private talks at the DMZ went long expected almost an hour. Bruce Harrison a feature story news and is insult and has more on the discussions the biggest takeaway it seems is. It Trump has said that he and Kim Jeong Hoon agreed to have both formed in Ooty Teamster negotiations on the nuclear issue to achieve the goals they set out to in the Singapore Summit last year of the main goal being reading the cream peninsula of nuclear weapons. For North Korea, Steven begin will still be heading his team. He also said that for North Korea it’ll be somebody that the Americans like, but he didn’t mean that individual basically said working-level talks. It will build up to another Summit. Perhaps, between leaders I will get underway shortly with these fresh teams are going to try and start over essentially to make this happen. Following the breakdown at the Hanoi Summit still critics, it was an opportunity for President Trump to do something first, that other presidents hadn’t done, but it was a substance. The last meeting and ultimately this only benefits Kim Jung hun and reinforces his position as a nuclear state. So in the long run we don’t know what the implications will be in the short-term, at least for president Moon jae-in here in South Korea. Maybe I have relief and he’s wanted some more progress on this issue. That was Bruce Harrison story news. So just how important was this meeting for more? On the historic event, we have reached a former US ambassador to South Korea to Christopher Hill. He joins us now from Boston, Christopher Hill. Thank you very much for doing this afternoon I’ll. Let’S start with your real into watching that moment has Donald Trump stepped into North Korea. It office of Courts, Bill Clinton and Jimmy Carter both been to North Korea, or many people have pointed out that this was really very good. For Secretary of State apparently want to go doubted myself the style over substance, you’re, saying they’re, all you talk about the weeks ahead and both sides saying that released United States, it more likely that we could see denuclearisation in Korea. Do this in one Fell Swoop, he’s going to have to go along with more of a step-by-step process, and you need somebody who’s got the patience and willingness to do that now prefer him to anyone else, but I don’t think the President should be directly involved in Play weapons on YouTube on that Peninsula is it in South Korea? How is that all part and parcel of this issue? Turians, like many societies, have different opinions and many South Koreans believe you cannot trust Grands want to see a negotiation for you to say in places like I oughta wotton and Washington, but how about trying to live here? And we really don’t appreciate that type of kind of committee – the US Administration to a negotiation going forward, I think, is well-received by probably most South Koreans. We have a lot of options for dealing with us, but we don’t have the option of walking away than claiming that it’s okay for you to have nuclear weapons. I think the US has been pretty clear that North Korea is going to have to give up their nuclear North Korea’s will finally accept that proposition. I negotiated with him for four years as part of it six-party process. Believe me, it was no fun at all. You think you got a deal on the next day. They got walking back on. The border encounter between the two leaders was a made-for television moment. The spectacle marked the latest milestone in two years of roller-coaster diplomacy between the United States and North Korea.