Trump: China has treated the US unfairly for decades 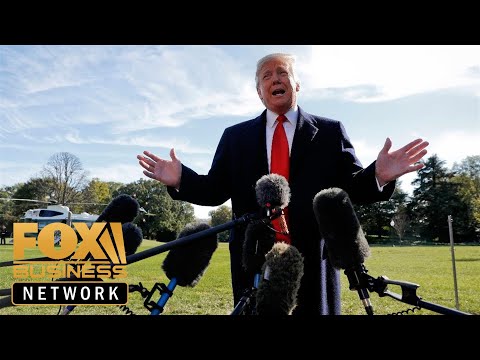 Trump: China has treated the US unfairly for decades Trump: China has treated the US unfairly for decadesSo the economy is doing very well by every measure, we’re having probably the greatest economy that we’ve had anywhere any time in the history of our country. We’Re having a squabble with China, because we’ve been treated very unfairly for many many decades or actually a long time, and it should have been handled a long time ago and it wasn’t, it will handle it now. I think it’s going to be. I think it’s going to that extremely well we’re in a very strong position. We are the piggy bank that everybody likes to take advantage of or take from, and that we can’t let that happen anymore. We’Ve been losing many years anywhere from 300 billion to 500 billion dollars a year with China and trade with China. We can’t let that happen. The relationship I have with President. She has extraordinary, it’s really very good, but he’s vagina and I’m for the USA and it’s it’s simple. We are again in a very, very strong position. They want to make a deal, it could absolutely happen, but in the meantime a lot of money is being made by the United States and strength is being shown. This is never happened to China before our economy is fantastic. There’S is not so good. We’Ve done up trillions and trillions of dollars since the election they’ve gotten way down since my election. So that’s the way. It is that’s the way it stands. We’Re going to do very well yeah when you never can say that, but we’re doing very well we’re doing it. I think we probably have the greatest economy that we employment numbers came out. As you know, they are record levels in almost every category. African-American, the best in history. You take a look Hispanic American, the best in history yesterday, Asian and the numbers came in, they are the lowest in history, the history of our country, women. I think it’s 61 years and soon that’ll be historic to show that we are doing and as far as employment numbers, we have the people working today in the United States that we’ve ever had before almost a hundred and sixty million people. So it’s really good. You got a machine over there. No, I wouldn’t like. We have a very good dialogue. We have a dialogue, going it’ll always continue, but we made a deal with China. It was a deal that was a very good deal at how to be a good deal. Otherwise, we’re not making it because we’ve been down solo and trade and other President should have done this a long time ago. We can’t just make a good deal and I told that the presidency, but we had a deal that was very close and then they broke it today really did I mean more than just more than negotiate that really broke it, so we can’t have that happen. President Trump on the U.S. economy and trade negotiations with China.