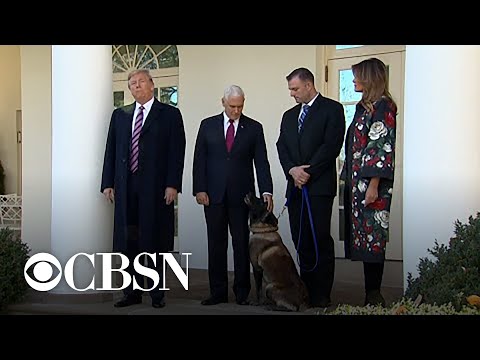 Trump honors military dog at White House Trump honors military dog at White HousePictures of white house now, where President Trump is holding an event at stake. It wasn’t just arrived with some of the great people from the special forces that did the it was a Flawless attack and albaghdady is gone, but that was a Flawless attack and I just read quite a few of them and we just gave Conan a a metal And a plaque and if it’s real and I actually think Cody knew exactly what was going on, but a dog that is very, very special and we could maybe say microphone over, maybe want to say something about the type of dog. So we’re going to put a muzzle on the dog, and I thought that was a good idea, but then it gets even more violent. John another dog is incredible, actually incredibly spend some good time with it and so brilliant that’s. Why was with the Special Forces people that it worked with and for obvious reasons they can’t be out in front of the median, but they did a fantastic job. Conan did a fantastic job and awards Trump in the White House. Michael, you have something to say it’s great to be here in this present, and I know you just finished meeting with some of the very same special forces who completed the successful raid that took down the leader of Isis, the arbor Columbus present. When you made the decision right up there in the White House the day before the raid, you would talk about measures that were available to check our soldiers, and it’s been described to us about the backup dogs that could go in in the event that Outback Daddy Had on him up explosive that you put the premium on the safety of our special forces in this dog, was there except we were able to complete the Rave without any American Casualty, and so I think I having a special forces here today, who obviously can’t come Out in the public, but also having this extraordinary dog here today is all the reflection us up of our armed forces in the great job that they do, but coming is really a hero in this really a real joy to be able to help wish. I could recover recovered actually very quickly and his since gun on very important, raise. As you know, we captured 100 % of the Isis caliphate when I took office, so we had almost nothing. It was as though they were just for me again and now it’s 100 %, And we have done a lot of work since then we have done a lot of work since the rain. Certain things have happened that a very important so we’re very, very good check. We’Ve had a lot of help to from other countries. We’Ve had a, we really did a job. I just want to. Thank you all. So this is special time for Conan and we really appreciated it. I was told about, did the breed I was told about coated himself and Konan is a tough cookie and nobody’s going to mess with Don, and I asked one question I said so: Stonington most really strong top fighter. What chance would this person have against Conan without the gun? What chance pretty much was none, so it’s amazing to see how beautiful and how come during a situation like this is and you’re very lucky. He doesn’t he’s not in a bad mood today. Jeff. Thank you. Thank you very much, and this is a great honor to have cold in here question 6 years, like an athlete 6 years, they start they like to get them at one and a half or two years old, 6 years from that time. After that, it happens where maybe the reflexes aren’t quite as good. You don’t things like that happened, whatever happened to us, but the dog, tutu and diverse special those are very hard to get this particular dog is. This is The Ultimate Fighter, Ultimate everything ultimate in terms of sniffing drugs. We have expensive this amount of money on drug equipment at the border that I was talking to the people I say well. Is there anything better than this equipment notice are the only thing better? Is a dog, a dog, this type of dog, exactly cuz, it’s a certain type of dog, that’s pretty amazing, but they are really better. We had a case where we had drugs in a the cylinder of a car, and it was undetectable by this very expensive machine, which is really amazing machinery, the door open. The hood knew exactly smell very much. At the White House Monday, President Trump and Vice President Mike Pence welcomed Conan, the military dog that aided in the raid that killed ISIS leader Abu Bakr al-Baghdadi. Watch their remarks.