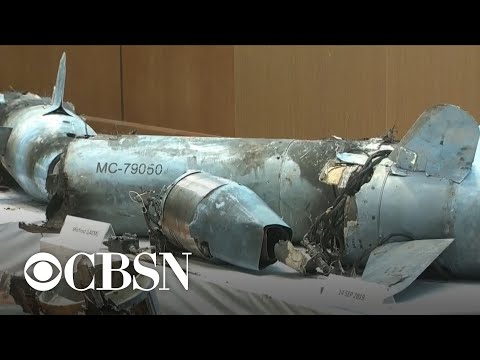 Trump orders new sanctions against Iran as Saudi officials present drone wreckage Trump orders new sanctions against Iran as Saudi officials present drone wreckagePresident Trump has decided to punish Iran with additional sanctions. This comes as new evidence. Points are Ron being potentially responsible for the crippling attacked the oil facilities. President Trump says that he may use other options Beyond just sanction. I’Ll Secretary of State, Mike Pompeo was in Saudi Arabia, where he sent to me with Crown Prince Mohammed bin Salman, that you are expected to discuss the way to coordinate a response. Earlier today, Saturday officials presented physical evidence record around and cruise missiles approved. The attack was sponsored by Ron Ron, however, says it’s not responsible, CBS News little bit more about that moment.. It was just his opportunity in front of the world in front of World Press to make the case that a Ron was behind this attack in first offense. You said Rome’s, he had cruise missile pieces of which were laid in front of us and we could walk up and we can look at them and they said this is the evidence that proves that arawn was behind it. That one thing that has been out there is that houthi Rebels from Yemen saying that they carried out this attack, but with one of their arguments today they said that these weapons, just that they don’t have the range to hit these crucial Saudi oil facilities. Deep in the desert all the evidence that they gather that it came from the north now they weren’t saying we’re in the north and if you look at that back that they had for us and they had showed a Ron and Iraq. These are two places that have been thrown out there. They said they haven’t, pinpointed it yet, but they said they’re going to still investigate, but one of the big questions is with this sort of attack. Is Saudi Arabia draw the line in the sand and I was able to ask that question Saudi hasn’t responded militarily to Iran when, when is the breaking point, what is that red line for you where you feel like you will be compelled to respond militarily launch point? I think I mentioned it for you and for your friends that we, we are working to know exactly the launch point and when we have it, we would have the evidence and the decision is nothing by 11 Arena. You have secretary Pompeo he’s here, he’s talking to Crown Prince Mohammed bin Salman they’re, going to be discussing this. But when you have a secretary of state here, doesn’t look like there right now going for military option. More diplomatic Pompeo is in the region to really rally support with allies, Observer yeah for both sides. If they are Regional rifles and both have been going after each other, you have a Ron who saying that they are not responsible. Rabiah is really just trying to build. The case to say no a Ron is responsible, they’re bringing in you and investigators. They’Re, presenting their evidence to the Americans are trying to get a broad International Coalition of one thing that the Saudis wear the Pointe at press conference. They said this isn’t just attack on Saturday but attack on the International Community, because it disrupts the oil supply that to the rest of the world, which many Americans will feel at the gas pump. It’S really going to be an uphill battle for them to try to prove at all. If that they were not behind that, because I only get the wreckage from the drones from the cruise missiles 7 that will launch. Where does they’ve landed in the desert, so they were able to get a lot of intelligence out of that. So you do have this battling narratives, but right now it seems like the Saudis, have the upper hand when it comes to it. The Saudi Defense Ministry presented debris from drone wreckage, saying evidence proves Iran was behind the weekend attack on oil facilities. CBS News foreign correspondent Ian Lee joins CBSN what this may mean for U.S.-Iranian relations.