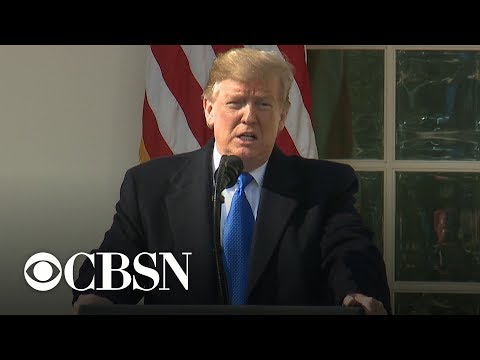 Trump says what’s not being funded to pay for border wall “didn’t sound too important to me” Trump says what’s not being funded to pay for border wall “didn’t sound too important to me”A lot of the money that goes to count to 1 billion dollars is money, that’s being reprogrammed in the dod budget. How how can you guarantee to military families and to our men and women of the military that none of the money that would be programmed to a wall will take away from other technology other Renovations construction that is desperately needed in our military turn of the military? Some of them haven’t been allocated yet, and some of the generals think that this is more important. I was speaking to a couple of them they take. This is far more important what they were going to use it, for I said what were you going to use it for it? I won’t go into details, but didn’t sound too important to me, plus, if you think I’ve gotten 700 billion dollars for the military in year 1 and then last year, 716 billion dollars we’re rebuilding our military. But we have a lot and under the previous administration our military was depleted badly to played it and they weren’t spending. I mean they had a much less than a much smaller amount of money. So when I got seven billion and then 716 billion and this year it’s going to be pretty big too, because his few things more important than our military, and I am a big deficit, believer and all of that. But before we really start focusing on certain things, we have to build up, our military was very badly depleted and we’re buying all new jet fighters, all new missiles all do defensive equipment. We have will soon have a military like we’ve never had before, but when you think the kind of numbers you’re talkin about CF 700716000000, when I need to billion three billion out of that for a wall which is a very important instrument. Important for the military. Because of the drugs at 4 in and as you know, we have a specific rules and regulations were they have a drugs and what you can do in order to stop drugs, and that’s part of a tooth would take you to money from that realm also. But when you have that kind of money going into the military, this is a very, very small amount that we’re asking for President Trump announced that he’s declaring a national emergency to build a wall on the U.S.-Mexico border. The president wants to redirect money that had already been allocated by Congress for the military to fund construction of the wall instead. Speaking in the White House Rose Garden, the president said the original plans for the money “didn’t sound too important to me.”