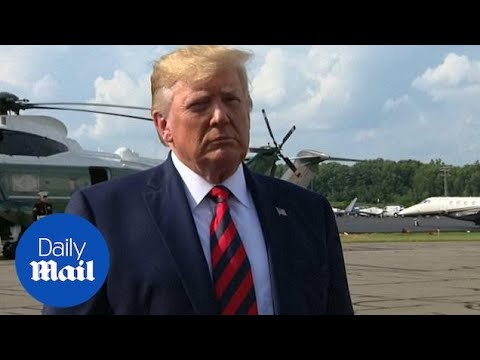 Trumps says Greenland is essentially a ‘large real estate deal’ Trumps says Greenland is essentially a ‘large real estate deal’But Greenland, I don’t know exact release. Somehow it’s just something. We talked about Denmark, allies with Denmark. We protect Denmark, like we protect large portions of the world, so the concept came up and I it certainly I’d be strategically it’s interesting and would be interested. But we’ll talk to them a little bit: it’s not number one on the burner. I can tell you that a lot of things could be done. A large real estate deal lot of things could be done. It’S hurting Denmark very badly, because they’re losing almost seven hundred million dollars a year caring, so they carry it at a great loss and strategically for the United States. It would be nice and wear big Ally of Denmark and we help Denmark and we protect Denmark, and we will think I’m supposed to stop I’m thinking about going there. I’M not necessarily definitely go there, but I may be going we’re going to Poland and then we may be going to Denmark. is reason at all, but we’re looking at it. It’S not number one in the burner. President Donald Trump has likened buying Greenland to ‘a large real estate deal’ after confirming interest in buying the world’s largest island from Denmark.  Trump said on Sunday that the idea of buying Greenland has been discussed within his administration because of the strategic benefits for the U.S. and suggested that the semi-autonomous territory is a financial burden to Denmark.  It comes after Denmark’s Prime Minister Mette Frederiksen said Greenland was not for sale and the idea of selling it to the U.S. was absurd.