U.K. ambassador to U.S. resigns after leak of cables critical of Trump 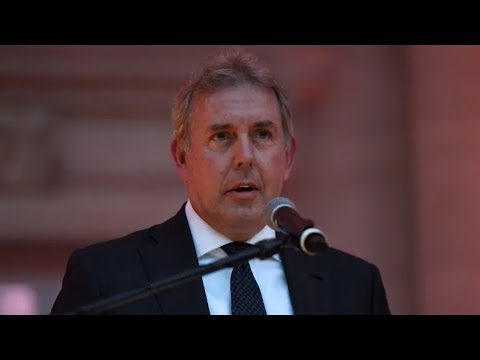 U.K. ambassador to U.S. resigns after leak of cables critical of Trump U.K. ambassador to U.S. resigns after leak of cables critical of TrumpThe British ambassador to the US Kim Derek has resigned. It comes just days after a series of diplomatic cables. Criticising US. President Donald Trump really are at the polls in Washington following this story for a so are they? What happened you know is that that resignation did come in a from the UK’s ambassador to the United States this morning and of course, as you mentioned, this follows the leak of the correspondence of the cables from UK’s ambassador to the US from broadcast to, of course, His colleagues, it was not meant for public consumption and certainly not meant to be seen by the u.s. presidents, because in fact, Eric was quite critical of Donald Trump and of the Trump Administration, and there are handling of world events in the Trump Administration method of operating. As well but again, these were Frank discussions that we’re not meant to be seen by the u.s. president or really anyone else for that matter. These were meant to be confidential discussion. We know that he has resign now because it did turn into quite a war of words with US president who, as we know, can be quite thin-skinned when he’s facing criticism quickly. Bring up part of the statement where weird Erica does in fact resign in which he says, although my posting is not due to end until the end of the year, I believe in the current circumstances, the responsible course is to allow the appointment of a new Ambassador And so he again now has resigned.. He wasn’t due to leave just yet, but he says that really he would have a limited ability to carry out his tasks. Now we know that Trump’s initial reaction to those leaks cables was well. I won’t be dealing Derrick anymore. That’S how I’m going to react with this, so that would put a severe limitation on the ability of the UK ambassador to the us. We know that also outgoing prime minister, Theresa May of the UK, had some comments about this resignation. Here’S what she had to say! The game has given a lifetime of service to the United Kingdom. I want all our public servants to have the confidence to be able to do that, but I hope the house will reflect on the importance of let me know in addition to the prime minister. In fact, also UK’s foreign secretary Jeremy Hunt was quite critical of the words that Donald Trump used to describe and Derick following the league of the cables, and he also expressed disappointment resignation of the UK’s ambassador to the US Tennis. I previously he called and Derek stupid. He had a lot of criticism for him, called him a pompous fool and wacky on Twitter, and that was yesterday in terms of reaction. So far we are waiting from official reaction white house, but we know that the chief of staff for the vice president Mike Pence, Marc short, is the chief of staff and he had said that it was probably a good move. I given the fact that he would have a limited ability to carry out his ask Derek that is given the current circumstances with that relationship. In the way things have devolved, given that leak, henna you’re welcome, Kim Darroch, the U.K. ambassador to the United States, has announced he’s resigning, after diplomatic cables critical of the administration of U.S. President Donald Trump were leaked.