U.K. PM Theresa May to quit on June 7 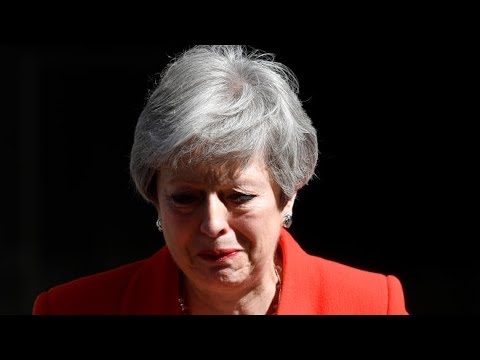 U.K. PM Theresa May to quit on June 7 U.K. PM Theresa May to quit on June 7Right now, British prime minister, Theresa May is at Buckingham Palace informing the queen of her decision to resign from office in exactly 2 weeks time June. 7Th had for many involved in British politics was never so much a case of if she resigns, but when she came to power 3 years ago to steer Britain’s departure from the European Union, and now she will make her own exit before it becomes a reality. I believe it was right even when the odds against success same time, but it is not so clear to me that it is in the best interest of the country for new prime minister. He saw Tessa questions following her in tears and having informed the world of her plan. She has shots. You see on her way to see the queen to deliver word pending resignation, personally Donald Trump for his upcoming State visit, but certainly the jockeying to succeed. Her has already begun when London, he was, of course watching the announcement from Theresa May and has been Gathering reaction. It was right at the moment where she said that she was the second female prime minister of Britain, but certainly not the last one. That’S when you really started to feel her voice, so break Legacy. Legacy was to pull Britain out of the European Union, reach that divorce agreement. That MPS would sign off on a, but they never did. She acknowledged she tried and failed 3 times to get her deal through MP’s approval. Parlay bets this week would really did her end was her attempt to get it through a fourth time. This was a retooled brexit deal. It was she was trying to get approved to in the House of Commons at the start of June and included an option for a second referendum, and even her staunch allies in the Tory party, who stood by her previously in the past couple days, told her times Up and really was up to her today to either set out a timetable for her departure or backbenchers within her conservatives. We’Re going to do it for her, so she said that crucial date June, 7th after President Trump visit and after the D-Day commemorations here when the prime minister is going to be front-and-center she’s, going to stay on as caretaker prime minister in the interim. As he’s laying out in her discussions with the queen as we speak, Heather and here’s more of that good, but certainly not the last – I do so with no ill-will, but with enormous and injuring gratitude to have had the opportunity to serve the country. I love and no questions. That’S how she ended that statement, as we’ve said on that emotional atone their Thomas in terms of people reacting to this announcement, one of the first to send out 2 reaction on Twitter. Thanks for Google service to the country in the party. Boris Johnson who’s already figuring very prominently, Thomas And discussion about potential successors, six Essentials accessories to add to resume his Tory leader, and indeed prime minister Boris Johnson, has the early lead, but don’t forget when it comes to Tory leadership runs the most likely to win at The start isn’t always the one who ends the winter. Indeed, Boris Johnson was at some point, perhaps even the front-runner. The last time he was expected to be to remain the last race, but she ended up winning by default, as everyone else dropped out in terms of reaction today, the French government saying that have to wait and see what’s at the impact, is on bilateral relations on And on and on brexit, but they say they stand ready to work with the new British prime minister that coming from a spokesperson for a French president Emmanuel and not call Nigel farage back in the Limelight this week with his upstart brexit party, he’s saying it’s difficult. Not to feel for Mrs may, but politically she misjudged the mood of the country and the party and crucially hear a Labour party leader, Jeremy corbyn has been calling for a general election for some now he’s renewing those calls today, in light of the departure of a Theresa May, or at least the imminent departure, and perhaps Heather that might be what’s needed, eventually to break the brexit deadlock for some later. Whoever that may be to get a consensus around what form of brexit should pull this country out of the EU. British Prime Minister Theresa May says she will step down on June 7. The Conservative Party leadership election to replace May is scheduled to start on June 10, after U.S. President Donald Trump’s state visit to Britain.