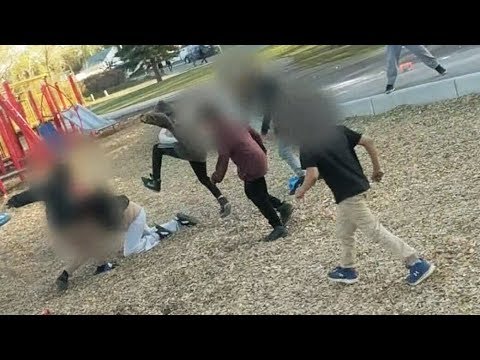 Video shows children attacking and beating woman in Saskatchewan Video shows children attacking and beating woman in SaskatchewanWith a violent attack took place at the attack was videotaped by a man who shared that video with CTV. He says it took place Monday night at 7. The video shows for young boys punching and kicking the unidentified woman that she falls to the ground. The woman struggles to fight off and starts to walk away. We don’t know what kind of injuries she suffered is Annie the man, the video says the women have been filming the boys who were throwing rocks at strangers. He says she told them to stop before she was attacked. The witness also telling CTV News. He wants the video out there, so something can be to make the park safer. Police say they have identified the woman attacked in the video and an investigation is under way. Colin Thomas CTV News, Saskatoon From CTV Saskatoon’s Colin Thomas: Police are looking into an apparent assault on a woman by several children at Pleasant Hill Park.