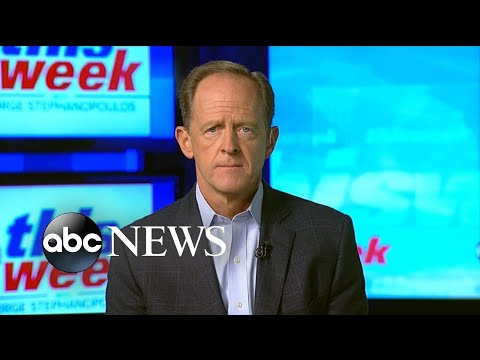 ‘Volatile tariff situation could jeopardize … strength’ of economy: Sen. Pat Toomey ‘Volatile tariff situation could jeopardize … strength’ of economy: Sen. Pat ToomeyJoining me now is the Republican senator from Pennsylvania Pat Toomey good morning. Senator to me are you that these new tariffs will further disrupt both the US and the global economy? Well, unfortunately, very strong economy. Right now you know record low unemployment, accelerating wage gains. We’Ve got a great economy, but I do think that the uncertainty caused by volatile tariff situation and this developing trade War could jeopardize that strength and that growth – and that is, I think, that’s a legitimate concern and it’s by the way. It goes beyond China and we saw last spring the president, that’s right into one morning. I woke up and threaten to impose fake new tariffs on everything. Coming is Mexico unless they cooperated sufficiently on an unrelated issue. That’S a country. We have a free trade agreement with so the uncertainty that we have. The added cost from tariffs to growth has repeatedly a certain China is paying for the tariffs, not American consumers. Would you say he is misleading. The public T is the value that does mitigate against the increased cost of the tariffs, because it just makes Chinese products cheaper to buy, but I would underscore there’s an important part that sometimes gets left out of that important part of the u.s. supply chain. Many manufacturers buy components and supplies and materials from China, and, while the devaluation of the Chinese currency can offset part or even all, of the Tariff cost for that manufacturer manufacturers competing with the European company or someone from some other country in the world that doesn’t have Tariffs, they’re buying those components of the lower cost because of the devaluation as well and they’re, not absorbing the cost of a higher tariff. So it’s still what’s American Business at a competitive disadvantage. A couple of days in your state, including right there in Allentown and we’ll summer, very worried about the Terrace others say it’s a temporary pain. They support the president’s plan. Why would you argue with them about it? Not being temporary Regis behavior, I’m the theft of intellectual property, in course, of Technology transfers. That is unacceptable Behavior. I would have preferred a different set of tactics, but the president deserves credit for challenging China. My hope is that that’s what is this is not just the fact that Chinese clothing and shoes are popular among consumers. That’S not the problem. The problem is this abuse and threat of ongoing theft of intellectual property. If we get the Chinese change their behaviour in a meaningful way in that area and then drop the tariffs, then we will have ended up in a better place. That’S what I’m hoping for, but let’s be honest in the meantime, we’re doing damage it’s a double-edged sword. You brought up Mexico. The president has used a similar strategy before he says his Terror threats on Mexico got them to help slow the stem of migrants. So has the president ramping up the pressure succeeded in some way to bring China back? I think it’s unclear A change in Chinese Behavior. It looks like we were close to a really significant deal at Chinese seem to have walked away, so I don’t think we’ll know until we actually have an agreement to turn to what was last night’s terrible mass shooting. You’Ve sponsored a bill to expand background checks on gun sales to online purchases and to gunshow you’ve expressed some optimism that this may pass. Do you think you have president backing and other Republicans repeatedly and recently about this topic? He is very interested in doing something meaningful. He hasn’t endorsed a specific bill. I think that would be premature, but he and I have an ongoing conversation about this. I know other interested senators are participating in that conversation and our staff, including the White House staff, very seriously, pursuing this outcome. I’M not sure where this all ends, but the president is very interested. I am forming very interested in measures that would make it harder for people who shouldn’t have guns to get guns, and you know we’re going to we’re going to take a very serious run on it. Thank you very much, Senator Toomey for your thoughtful response. We appreciate it highlights in watch, live event, coverage click on the right over here to subscribe to our Channel and don’t forget to download the ABC News app for breaking news alerts, thanks for watching Toomey joins Martha Raddatz on “This Week” to discuss tariffs and his gun control proposal.