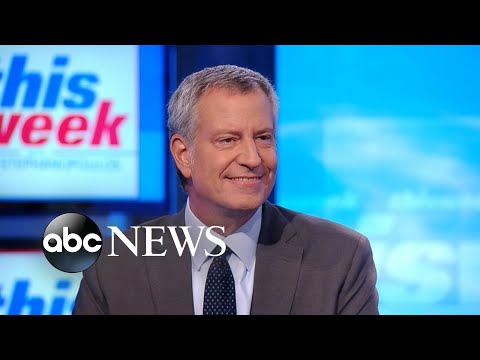 Voters can ‘impeach Donald Trump at the ballot box’: De Blasio Voters can ‘impeach Donald Trump at the ballot box’: De BlasioHas to be on the safe Wednesday night in New York City Mayor Bill de Blasio this morning by the last 24 hours from the larger reality, this country, so he uses a racist appeal, uses a bait-and-switch. You watch him for a long time. I watch him for a long time here in the context of New York. There is a conman reality of Donald Trump insects, classic bait-and-switch maneuver everytime. The real issue in this country is that working people are stuck economically. Does tremendous frustration out there and working America and folks are getting ahead? They think the next generation is actually going to do worse than they did. What is actually giving away the store to the folks who already have a lot? You literally made the rich richer with those tax cuts for the wealthy and corporations. The Democrats and Republicans media everyone goes chasing after those tweets. He keeps attention off the thing we shouldn’t talk about this counter, that Patriot receivers, for example, but I don’t think we should have sex about it, the best way to impeach Donald Trump. The way I want to impeach Donald Trump and why we should be asking yourself this question. This is really what these debate should be about in Detroit. Why do we lose and what do we do differently? Will I say it’s simple: we stopped talking to working people. We lost their allegiance while them stayed home. Some of them are the Trump. Why? Because give me the party release not of working people, and so we lost the allegiance. A lot of people been with us for Generations. We can’t let that happen, again. with action with a vision Union. I say we need to make sure the folks in the gig economy have benefits wages that are protected. We need to make sure folks can’t just be fired in this country without just cause, which is the truth right now. We need to do things like ensure the $ 15 minimum wage and paid vacation days. Every major country on Earth provides paid vacation days as a matter of law doesn’t happen in this country will go to pass law New York this year, 2 weeks paid vacation for every working person. Here’S a guy who told wealthy donors not much is going to change for them when he becomes. President he’s got too much of a track record of being part of the status quo. Don’T want to anymore. They want to break out of that status quote and Donald Trump very artfully. I got to keep your attention off that Central issue. Do you want a change in your family’s life in your economic reality? Do you want something different, or are you going to accept the status quo? Most Americans do not want the status quo. Donald Trump actually doesn’t want that conversation I see or Joe Biden is not well positioned to have that come face of practical problem. He broke through sure of the polling threshold in the fundraising thresholds to make him. The third debate says Wednesday night, your last chance to break through that first debate. You’Re right, I was able to get a lot information that I talked about putting working people first and it got a really strong response. There is something powerful and Democratic, with the small D in what the DNC has set up, hear the people that got to decide in the polls and with those Grassroots donations. Nice save people believe in the message I’m putting forward go to Bill de Blasio., Calm and help me stay on that debate stage. It’S literally going to be look New York City, we’ve done Pre-K for every child, for free we’ve done the $ 15 minimum wage. We’Ve done paid sick days, we’re giving those two weeks paid vacation every working person, we’re literally guaranteeing healthcare for anyone who does not have health insurance does largest city. My my good position paper and it’s President Trump won’t be welcome back in New York after Presidency. What you mean by that are so many people who feel affronted and hurt and degraded by what the president knighted states is said and done theoretically grew up with a child of a millionaire hi. Everyone, George Stephanopoulos here, thanks for checking on ABC News, YouTube channel. If you’d like to get more videos, show highlights and watch live event coverage click on the right over here to subscribe to our Channel and don’t forget to download the ABC News app for breaking news alerts. Democratic presidential candidate Bill de Blasio talks about President Trump and the 2020 campaign on “This Week.”