What it takes to put on B.C.’s biggest firework shows 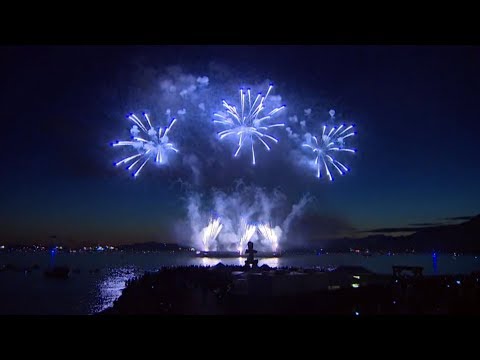 What it takes to put on B.C.’s biggest firework shows What it takes to put on B.C.’s biggest firework showsFun about right now, headed to the barge for the fireworks, is launched for the celebration of Light Festival. That is where we’re going and we’re going to see what it take to put on. One of these shows where we are at one of our shell position. We’Ve got five predetermined positions on the barges here. We’Ve got a bunch of our local crew, they’re loading, the shells programs, how Team India asked us to this is a 3 inch or 75 mL shell and electric match lights. This fuse with 60 ft II hits a Lyft charge just like a gun barrel propels bisbal into the sky with a little time he was on it. We’Ve got approximately 2500 to 4000 shells depending on the team that go up per show and who are the big guys go there buried in sand 2/3 of the depth of the mortar? So if something should happen, it’ll contain a lot of it or let it expand. Crack the box, but the rest of their guns will be standing up. Safeway, cakes, look like a cake. This one particular there’s a hundred shots. You got one fuse that lights at one end or row at a time, depending on how it’s fused and that’s where you’re going to see the product, that’s kind of a lower-level in the sky, but very big busy. This is the best bomb Shack in the World to shoot from. We can see the whole barge. We can control our computer. Everything is done by one push of a button. We’Re dealing with explosive, its black powder kits same forever, so despite all the safety regs and all of what we do, sometimes things happen and we just have to be ready for them. How do you put on B.C.’s biggest set of fireworks shows? CBC’s Tamara Baluja goes on a behind-the-scenes tour of the Celebration of Light fireworks barge in English Bay.
To read more: http://cbc.ca/1.5226679