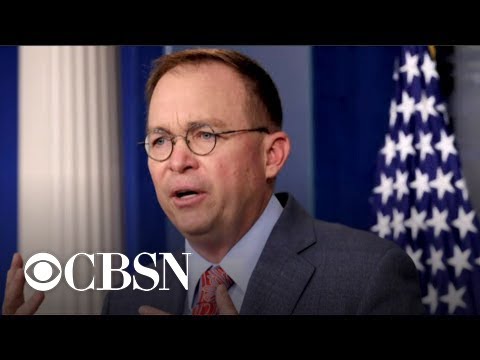 White House emails reveal effort to justify Trump’s freeze on Ukraine military aid White House emails reveal effort to justify Trump’s freeze on Ukraine military aidWashington, new information has surfaced about the White House’s decision to hold 400 million dollars of US military aid to Ukraine and internal review by the White House uncovered email showing acting Chief of Staff, Mick, Mulvaney location for the freeze. This email was apparently said after President Trump had already ordered it explain the significance of these emails significant Holden at 400 million dollars of military aid to Ukraine after the fact, meaning that perhaps with the White House has been saying publicly, is that all along they were Worried about corruption and that’s why the withheld the aid, if you’re, looking for a legal justification after that would suggest. Perhaps that is not true and then, of course, there is also the timing up this. This comes as Democrats are getting very close to forming articles of impeachment against the president, and these emails could provide new evidence emails because of an internal review being conducted by the White House. What does the release of the information tell us about? You know the conflict that maybe taking place inside the White House holes in the back category. This seems to be a review done by the White House counsel’s Office. Pat cipolloni is in that position and it appears to have caught the acting Chief of Staff, Mick Mulvaney by surprise, that’s significant, because the two of them do not get along. It is a very open secret here, and Washington and cipolloni would very much like Mick Mulvaney’s job. So that gives you some context as to how this may have happened here at the White House in what appears to be a release of information is kind of embarrassing. Acting Chief of Staff, it sounds like an episode of The Apprentice parnis he’s one of Rudy giuliani’s Associates. He was Kian trying to kind of dig up dirt on the Biden’s in Ukraine and get these investigations announced. Reportedly, the intelligence committee is now in possession of audio and video recordings as photographs from parnis. We don’t know what that material shows or or what it did, what it intimate or implicate. But we also know through parnis is attorney that he is willing to come testify on Capitol Hill and also seems to have some information about Devin Nunez, the ranking Republican on the intelligence committee meeting with Ukrainian officials about the Biden. So he is kind of put this tantalizing tees out there that there might be more to the story than we. Currently, I want to ask you about a former White House counsel, Don mcgahn, a US District Court Judge is expected to release a decision on whether or not he should honor a subpoena to testify before the house, Judiciary Committee. So, no doubt there will be others who have peanut who have work for the White House and work for the White House. Now that are waiting to see you know what this decision is going to be. But can you talk to us about what his testimony could bring to the impeachment investigation 4 weeks in the judge says it will happen by the end of today, so that that that should be interesting. What Democrats are hoping for a Democrat subpoenaed him? He play and absolute immunity and they took it to court, so this judge will say whether or not he can testify his testimony could be interesting, because Magan would be in a position to know whether or not President Trump lied to the Mueller investigation when he provided Written testimony, so that’s part of what the Democrats would be after the real significance, though, could be that if the judge says yes, you should go testify on Capitol Hill. That subpoena is worth more than the claims of immunity by the White House free somebody up like John Bolton, who clearly wants to go to Capitol Hill and tell us a story but said that he wanted to wait for this ruling to see kind of where the. Where the law Falls as to whether you obey the executive or the legislative branch delivered here today, the official White House Christmas tree will arrive on the property, but there will be a turkey here tomorrow. Why and if history holds the president, will part of that turkey An internal review by the White House uncovered emails showing acting chief of staff Mick Mulvaney asking for legal justification for holding $400 million in military aid to Ukraine. The hold is at the center of House Democrats’ investigation into whether the president should be impeached. CBS News White House correspondent Ben Tracy joined CBSN to explain the latest developments.