Why corpse flowers are a big, stinking deal 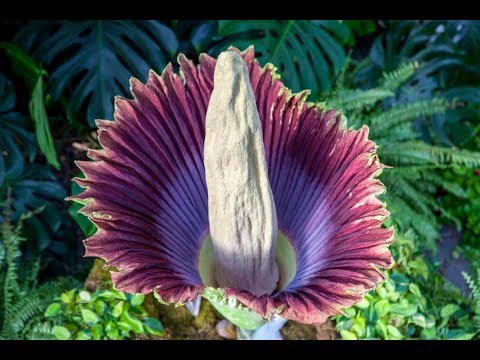 Why corpse flowers are a big, stinking deal Why corpse flowers are a big, stinking dealWe’Re going to show you up close a Titan of the Plant World next Titan arum, to be precise, that is the official name for the largest flower in the world, the flower that can take as long as 10 years between blooms when it does blue. You probably recognize its others name because it raises quite the stench is called the corpse flower and take a look at this, but it does right now and it is an opportunity for us to say hello to a very special guests. Susan Dudley biology, professor at Mack and coolest job she’s, The Faculty supervisor, for the greenhouse. I did not Greenhouse for us live this morning. Hello, Professor Dudley, hello, Susan good morning, pictures of corpse flowers, but I have never done an interview live with someone stand, I’m right beside so there it is faith and the the thing is here that it is trying to look and smell like rotting meat to attract Attract as pollinators, which are cherry and beetles and active part, I was thinking that maybe interactive the smell is not, though everyone talks about how bad I mean corpse flower. What is it smell like to you right there right beside it, people who’ve experienced corpses. They say that’s what it smells like Rotting Flesh rotting meat. Should you be having a masquerading? How long do I have with you before it gets to be, gets to be overwhelming, aesthetic sensibilities so so bees and butterflies and birds like pretty colors and sweet sense, but things there. Many flowers that are that are flowers that are pollinated by flies and they are trying to look and smell their best like just hold on for a second, maybe we’ll get Professor deadly back. Shall I wait? We have oh no Listen Hold on we’re just going to correct this, we’re going to call again cuz. We need to explain this to you, I’ve, so many more questions to ask. So we just stay with us, we’ll be back on CBC News Network hooray. We have reconnected with our gas stat McMaster University Susan flower in bloom, a rarity nice to see you again hi professor Dudley. Are we all good? So I thought we should do a random survey guy’s hello good morning, and it does hold up to the name quite well. Some people didn’t want to be in the room. Last night was blooming due to the smelting so intense. By are you cold body strong? I can’t I can’t do from television, I can see it, but I can’t smell it. Thanks for stopping, you can go about your day, but thank you just wanted to get some other descriptions anyway. Back to you, Professor, you were telling us that, because this is attracting flies and carry on bugs that it wants to look like it’s some sort of in state of putrification. What else is unique about that particular plat? I’M heating up to send the smell four kilometers. So in its native Sumatra, it might attract flies and visited another carrion flower and are therefore carrying pollen with it. It’S it’s official named Titan era, because it is a Titan in the Plant World how how big? How much does that weigh so so when, and it’s probably half again that big by now that incredible that grows at a speed that, can you actually almost see it growing before your eyes all happened in a week and a half from when it was a little Over meter tall – and we went oh no – it’s a flower to the size it is now sometime today I will start to close cuz. Part 1 is exposing the female flowers and attracting flies from part. 2 is keeping those flyers close to the male flowers. Balloon dies off, the male flowers will head out and go pollinate something else. If they’re, if the plant is lucky, can see it so clearly at the base of the flower. There’S a square cutout area, explain what that’s all about professor different areas of female flowers. To see if we can get starting at 4:30, when we knew the bloom was happening and then we’ll find out this, isn’t it kind of stench that permeates your clothing? Is it what a treat to meet you and to hear all about this? Professor? I appreciate it. The full bloom corpse flower The greenhouse at McMaster University in Hamilton, Ont., has never had a titan arum fully bloom before, but it’s now the home of a two-metre-tall blossom that smells like rotting meat. McMaster biology professor Susan Dudley joined us from the greenhouse to explain the science behind the stench. (We lost our video chat connection partway through but got her back to complete the interview.)