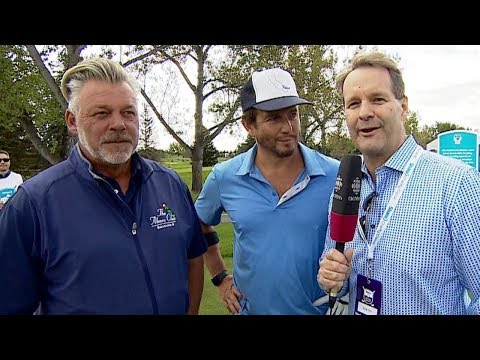 Will Arnett and Darren Clarke make appearance at Shaw Charity Classic Will Arnett and Darren Clarke make appearance at Shaw Charity ClassicI will hear the voice of Batman in The Lego Movie set. How would Batman do golf play-by-play? First of all that can be confirmed. Secondly, Batman doesn’t like go was, Will Arnett and Darren Clarke will how’s it going so far? Well, I would let Darren answer it, but he be too honest, beautiful drive.. What are you working on? Is your game in state of Arrested Development right now I don’t get. It shoot its a CBC you’re, okay, the amateurs and then I saw that it was you. So you’re not everybody’s, getting along encouraging each other. What’S it like for you to play some of their golfers slow the question or acting? What’S the temperature playing golf for me, it is it’s darn near impossible Nationwide with that, will the hardware now and it’s not what you think he’s got he’s got a lot of the evening before the opening rounds. When you pull up actually look out and went for the set whenever they have to be focused on golf, all the time fix it. On Friday morning, I’m going to work out here to check each other’s thoughts inside as well as we can. So you know. What’S it’s all well and good for the serious stuff. Starting on Friday? What are you up to these days professionally? No, I’m just I’m on my way to the UK to start shooting a new series for the BBC, and this is a perfect place to stop and hang with my friends from Sean from Freedom, mobile and and and I got to go to work tomorrow and Jaron. What about you as far as Rory McIlroy, your countrymen, when it’s 15 million dollar bonus for taking the FedEx Cup last weekend at? Do you think the champions tour in the future you’re going to see if you were stars that were here because they have so much money? I don’t know if it’s valid point in PJ Turner doing wonderful job. You know that the money is going out on your right and 15 million dollars is a lot of money to anybody. Last weekend, getting a couple of million from Rory just just off the top play a golfer in a movie or TV series. Looking for a guy who’s, the other fantastic example of it it’ll be fun to build the kind of capture that for sure thank you so much and enjoy the rest of the day and the weekend. Actor Will Arnett and 2011 British Open champion Darren Clarke are in Calgary for the Shaw Charity Classic. Find out just exactly what they’re up to, besides a few laughs, from the voice of the Lego Batman Movie himself.